Since its inception in 1993, raw food diet has been controversial.  Australian veterinarian Ian Billinghurst, the pioneer of Bones and Raw Food also known as Biologically Appropriate Raw Food (BARF), suggests that commercial grain-based kibbles are harmful to dogs’ health.  Instead, he said that canines should be given their pre-domestication natural foods such as fresh meat, bones, and vegetable scraps in order to prolong life.  Since then, more variations of raw feeding were introduced in the market.  Many claim positive results greater than what commercial feeding provides.

But the road to raw feeding is anything but peaceful.  Fortunately for the followers of Billinghurst’s ideology, a wide scale recall of melamine-contaminated dog foods in 2007 has opened the floodgates of curiosity among pet owners.  Do-it-yourself articles and guides have proliferated on the Internet with emphasis on how to prepare raw meals, preservation techniques, and nutritional counter.

Based on the book Give Your Dog a Bone, canines fed with raw meals have lustrous coats, healthier skin, cleaner and stronger teeth, higher energy levels, and controlled temper.  But contradicting studies from the FDA showed that the risks of raw feeding outweigh the benefits, which include bacterial threats to animals and humans, unbalanced diet, and possibility of organ punctures.  On the other hand, raw food advocates argue that there is no single most accurate answer to dog nutrition.  Pet owners possess the liberty to do a trial and error on what works best as long as it does not endanger the life of their dog. 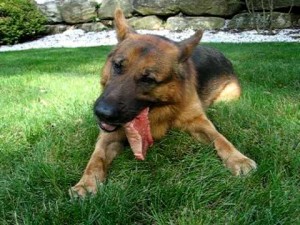 Three of the most common questions asked by potential raw feeders are: “Where do I begin?” “What types of raw food can I give?” and “How often or how much raw food should I feed?”  The basics of a balanced raw meal, according to Raw Diet and Natural Health for Dogs, is comprised of 80 percent lean meat, ligaments, and fat, 10 percent edible bones, 5 percent liver, and 5 percent offal.

The goal is to provide the highest amounts of protein, followed by fat, carbohydrates, calcium, phosphorus, and vitamins and minerals.  Canines need at least 10 percent of calcium for strong teeth and bones.  On the other hand, organic liver which is responsible in flushing out toxins from the body must be given conservatively.  Contrary to typical practice, dogs do not have the ability to fully digest carbohydrates, a main component of grain-based kibbles. 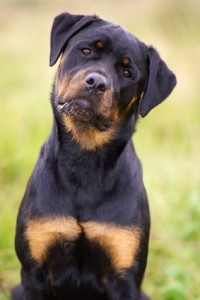 The philosophy behind raw feeding is vulnerable to misconceptions due to lack of knowledge canine owners.  Concerns about diarrhea, indigestion, and constipation as a result of switching to raw diet plague canine owners.  But the truth is that if your dog is conditioned to eat grain-based pet foods for many years, its body may adjust longer as it welcomes raw meals into its system.  This should not be mistaken as serious or fatal because canines have the ability to adjust to their natural conditionals eventually.  However, dogs with existing medical condition should be given light meals so as not to overwhelm its digestive system with the temporarily foreign diet.

Another point of debate is the insufficient amount of nutrients found in raw meals.  In order to balance out the dog’s dietary needs for protein, fats, calcium, carbohydrates and other elements, the pet owner must be able to source from other organic ingredients.  The appearance, color, and quality of stool indicate any drastic changes in the canine’s system.  You can monitor its digestion on a daily basis through gradual feeding starting from light to moderate to full serving of raw meals.

While raw feeding proponents do not exclude the possibility of parasite contamination, pet owners must exercise extra precaution in preserving mixed meats.  Always keep raw foods refrigerated, and it must be consumed within three day.  Beef meat has the highest nutritional value, but if you opt to feed pork or fish, you must preserve it below the freezing temperature for two weeks prior to serving.

Do not feed cooked bones as it is harder than the fresh ones.  Liver, on the other hand, should be given only once a week to aid the excretion of toxins.  Aim for varieties of raw bones, raw meat bones, whole prey, raw fish, raw fat, and raw offal or internal organs.  It should be considered though that not all canines can easily adapt to raw food diets.  Too much domestication often affects the dog’s instinct for natural prey.

If you think there are unusual changes in your dog’s health, physique, or behavior, seek the help of experts from pet care services like PetCo or PetSmart.