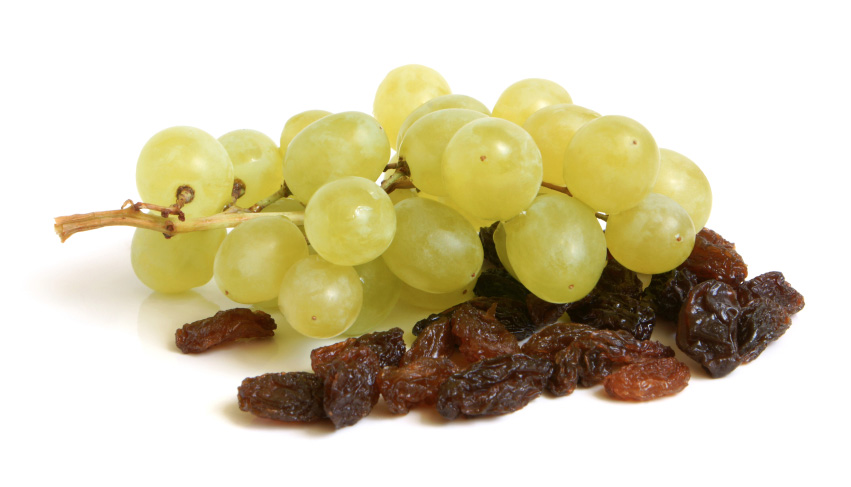 Chocolates are not the only poisonous food items where dogs are concerned. Grapes and raisins can be as deadly as chocolates! But emphasis must be made that not all grapes and raisins will have similar effects on dogs in the same way that not all dogs will have adverse reactions to these food items. In dogs that have adverse reactions, however, the consequences can be fatal especially in cases of acute renal failure coupled with anuria (i.e., lack of urine production).

The poisonous nature of grapes and raisins was first identified and observed in scientific settings by the Animal Poison Control Center (APCC), a veterinary facility operated by the American Society for the Prevention of Cruelty to Animals (ASPCA). Between April 2003 and April 2004, APCC observed approximately 140 cases of grape and raisin poisoning wherein 50 developed symptoms and 7 died.

Symptoms to Look Out For

Dogs of any breed, age and gender may be affected by grape and raisin poisoning although the severity of the symptoms will vary depending on several factors including the amount of the food ingested. The most serious complications of grape or raisin toxicity is sudden kidney failure accompanied by insufficient urine production, a double whammy that can result in multiple organ failure.

While these symptoms may also be signs of other health issues, you should consider them as warning signs that your dog is in need of appropriate and immediate veterinary care. As with any type of food poisoning in dogs, the early detection of the toxic ingestion will likely result in effective treatment and fast recovery.

Scientists have yet to determine the exact substances in grapes and raisin that results in the toxic reactions.

Grapes and raisins poisoning in dogs is a veterinary emergency that requires immediate medical attention. If you are sure that your dog has ingested either of these two food items, you may have to induce vomiting as soon as possible so as to expel the toxins before these can be absorbed. But you should never induce vomiting under the following circumstances:

Regardless of whether your dog has vomited or not, you should rush it to the nearest veterinary facility for appropriate treatment.

If possible, you should collect a sample of your dog’s vomit since the vet can determine the amount of grapes/raisins ingested and the severity of the toxicity. Your dog’s vet can then make a smarter decision regarding its treatment.

Your dog may undergo several tests for a definitive diagnosis of poisoning; the tests can include a complete blood count, urinalysis, and biochemistry profile as well as ultrasound. The vet will be on the lookout for increased blood calcium, phosphorous and creatinine as well as for changes in urine chemical composition (e.g., presence of protein and/or glucose) and abnormal deposits of minerals in the kidneys.

Fortunately, grapes and raising toxicity can be successfully resolved provided that early detection and treatment are applied. The treatment methods include:

Medications may also be used to treat the symptoms and side effects of the abovementioned treatments. For example, antiemetics may be administered to manage vomiting while H2 receptor antagonists may be prescribed to protect the stomach from uremic gastritis. Dopamine or furosemide can be used in stimulating urine production in case of oliguria.

The vet will also closely monitor levels of creatinine, BUN, calcium, sodium, phosphorus, and potassium. Changes in these chemicals in the body can signal a turn for the worst or for the better.

Time is of the essence in the effective treatment of grapes/raisins ingestion in your dog. When the kidney has failed and urine cannot be produced, multiple organ failure follows and your dog will die. Even timely treatment can result in negative prognosis when the toxin has been absorbed into the system, thus, your dog’s vet will provide a guarded prognosis.

And when your dog hurdles this emergency, be sure to bring it to PetSmart for a professional grooming session! Your dog will appreciate the pampering.