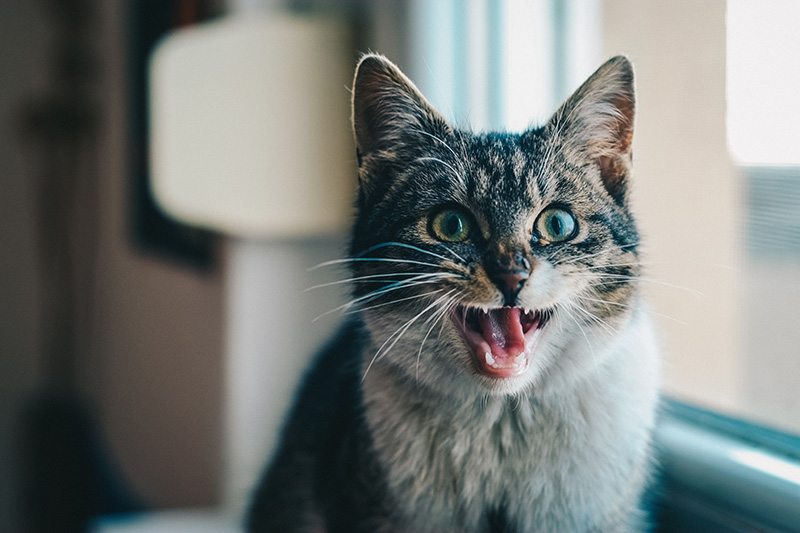 Despite being domesticated, pet cats can exhibit signs of aggression toward other cats, other animals, and humans. Furthermore, feline aggression may not be seen as aggressive as canine aggression but, in reality, it can be just as dangerous for the animals involved and humans with the bad sense of joining the fray.

Here, we will discuss the six major types of cat aggression, as well as their triggers and causes. Keep in mind that feline aggression can be caused by medical conditions, territorial issues, and behavioral problems; examples include epilepsy, arthritis, trauma, rabies, hyperthyroidism, and cognitive dysfunction. It’s important then to bring your aggressive cat to a veterinarian for a thorough medical examination to determine the possible causes for his bad behavior.

Cats are fiercely territorial animals; male cats are more likely to protect larger territories than their female counterparts. Their territorial aggression is typically directed against other cats but it can be directed toward other animals, especially dogs, and people. They mark their territory by urine spraying, chin rubbing, and patrolling the area, as well as chase, ambush, and stalk the targeted animal.

Territorial aggression is usually a type of offensive aggression and, thus, the cats adopt offensive body postures like growling, swatting, and hissing.

Also known as fear aggression, defensive aggression stems from the cat’s fear of a threat coming from another animal, a person, or an object, even a sound. The greater the fear, the more pronounced the reactions so be careful about appeasing or approaching your cat when he’s in a defensive aggression mode. You have to wait until he calms down before offering any solace or food.

Rough play can also cause aggression in cats although it’s most common in kittens and young cats two years old and below. In many cases, play aggression can also be directed toward the cat parents, a redirection that can become harmful to the humans because there may be biting and scratching involved.

While rough play allows kittens to practice their life skills, so to speak, it should be monitored by cat parents. You have to provide your kitten with plenty of opportunities to play and to discourage them from attacking people, especially their hands and feet, during playtime.

But even when a cat likes being petted, there may be a limit to his tolerance and, once it’s reached, he becomes aggressive. According to the widely-held theory, the repetitive stroking movements can cause excitement and arousal, even pain, in a cat; static electricity in the fur may also contribute to the unpleasant sensations.

If your cat has petting-induced aggression, you will observe signs like quickly turning his head toward your hand, as if he’s ready to bite it, flattening his ears, and twitching his tail, as well as dilated pupils and restlessness. You should stop petting your cat and let him off your lap in this case lest you become bitten.

Cats are natural predators even when they have been domesticated. Cat parents, in turn, should respect their predatory behaviors because these keep their pets motivated. Besides, cats are superb hunters and can hunt rodents like voles and mice, a practical thing to have in a home.

In a way, predatory aggression isn’t technically aggression because it isn’t directed at other cats and people but instead on prey. But cat parents are advised not to interfere with the predatory behavior unless absolutely necessary.

Cats exhibiting the signs of redirected aggression are among the most dangerous because the attacks can be damaging to property and frightening to see, especially when they engage in biting and swatting with their paws. Redirected aggression happens out of the cat’s frustration at his inability to avenge a wrong, hunt a prey, or get access to something, among other reasons.

Your cat, for example, becomes agitated, anxious and aroused when he can’t get at another cat intruding on his territory or a prey he can’t hunt. He then turns his frustration at another animal or person near him or approaching him.

Redirected aggression is dangerous for another reason: There’s a significant delay between the situation that aroused his aggression and the actual attack, sometimes even hours. You, the cat parent, may then describe the attack as out of the blue without realizing that the trigger was already present hours before he attacked.

In many cases, cat aggression may be idiopathic in the sense that there’s no identifiable reason for it. No matter the reason, however, you should strive to address it properly.  Be sure to work with your pet’s veterinarian and, if needed, with a cat behaviorist for this purpose. You can ask for referrals from Petco and PetSmart if you’re unfamiliar with the topic.